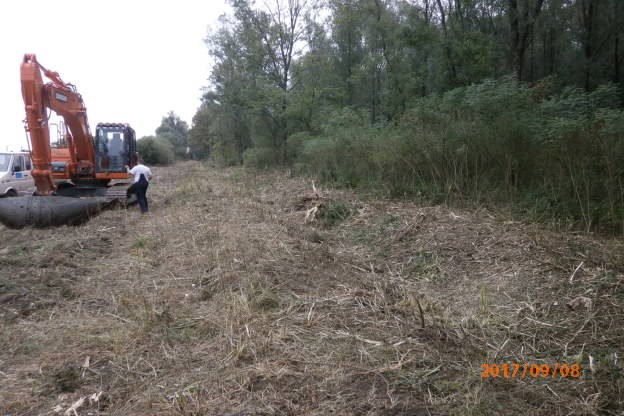 Within the project activities, the overall objective is to restore facilities damaged by floods in border area ​​Spačva-Bosut forest basin in Srem District and Vukovar-Srijem County. Regarding that, in Bosut forest area which is governed by PE “Vojvodinašume” – forest holding “Sremska Mitrovica”, works have started on the reconstruction of section of the road in length of 3929 m from the main road towards the border crossing to the entrance in forest “Puk”. This route is significant because due to its elevation, it can represent an alternative route to Jamena in case of large floods (such as in 2014), when the main road for Jamena was flooded. Also, due to its location, it can serve as a flood protection line in case of high water levels. Alongside with the reconstruction of the road, works have started on the reconstruction of part of the canal network in that area (canals of II and III category of the hydromelioration system “Lipac” of the subsystem “Obošnica”), and the project also plans to install an automatic water measuring station in Bosut at confluence of Studva with Bosut. Works on the canal network reconstruction and reconstruction of the roads have started in accordance with planned schedule and the dynamic plan. PE “Vojvodinašume” and Public Water Management Company “Vode Vojvodine” will benefit from their realization, as well as the local population living near the area where works are being carried out.